Home » Blog » What is Mastodon? 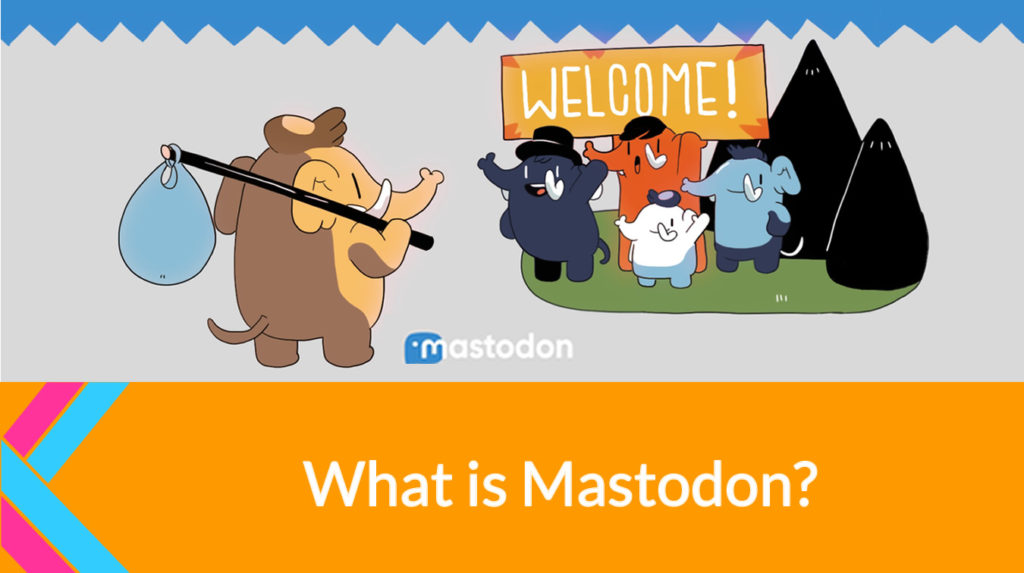 In the wake of Twitter’s uncomfortable takeover by Mr. Musk, social network Mastodon has been garnering headlines – but what the hell is it, and does it really mean we need to learn another network?

Well, that part is up to you, but what can’t be ignored is the rate at which people started signing up to the network – at the rate of 4,000 per hour at one point, totalling more than 6 million user accounts as I write this (source).  Big names who were previously famous Twitter fans (Stephen Fry, Greta Thunberg, Neil Gaiman and more) have created accounts and are already active on the alternative platform.  So if we can’t ignore it, here is the one-page guide to what the heck it is and if you should care.

Important Point 1 – It is decentralised and open source.

That means that NOONE owns Mastodon.  Mastodon is a free and open source platform that everybody can use, modify and install on their own server. The people who developed Mastodon do not own any copyright on it.

So instead of one person or company running the servers and controlling your data, anyone can set up a server to host Mastodon for themselves, for their organisations, or for others to join.  An important principle of Mastodon is that you are in charge of your data.

But someone started it, right?
Eugen Rochko, a 29 year old German programmer developed Mastodon back in 2016 shortly after graduating from University.

“He was a fan of Twitter but wanted to create a platform not controlled by any single company or person, reasoning that online communication is too important to be at the whim of commercial interests or CEOs. He believed that the lack of profit motive and canny design could discourage harassment and abuse, and provide users more control.” Wired.com

The Help pages for Mastodon say as much: “Mastodon is not Twitter.”  There is very little to compare between the two networks – in fact, that statement doesn’t even work because technically Mastodon is not a single social network.

Important Point 3 – Yup, it is technically not a Social Network

It is thousands of independent social networks, each known as an instance of Mastodon, collectively interlinked and known as the ‘Fediverse’.  Don’t panic, stay with me, it will all become clear why this is a great thing, and that Mastodon is more like the anti-Twitter.

You see, every one of these instances of Mastodon has its own server, community, rules, admins and moderation.  That means it is focused, so you see more things you are interested in, and it is safer as it is administered by a moderator who can not only block people who troll or break the rules, but block an entire instance from interacting with its members while under their ‘protection’.  I’m giving this some poetic license so that you can understand why it is such an appealing platform for people.

“There is no single idea of what to moderate and what not to moderate […] The Fediverse provides different places where you can go and experience social media the way that you want to experience it. You can have a super safe space with very strict moderation; nobody has required you to compromise on anything whatsoever.”

Example – when one more extreme rightwing social network (Gab) switched to the Mastodon protocol in 2019, it brought with it a million users, and was promptly defederated (blocked) by almost every major instance.  This left Gab’s users in a sort of bubble where they could talk to each other, but not interact with the wider community.

Important Point 4 – Instances can be about anything

Some of the individual instances are very large and more general like Mastodon.social which set up by Eugen Rochko, the German software developer who first created the Mastodon protocol.  Others are tiny, private, and very specific.

Users of the instances make posts that are short (around 500 characters) and adorably called ‘toots’.  These can be reblogged, or reshared (aka boosted) and replied to.

Important Point 5 – Signing up is different

Right, ready?  OK.  You choose the Mastodon instance that appeals most to you, and you join it.  You can still interact with users who are on other instances, but this is your home.  Your username is your handle (@username) and your instance (@server-name) so for instance @kukastudios@mastadon.social – follow me?

You can move servers and redirect your old username to your new one, so don’t agonise over which one to join.

Other things you should know:

“But behind it all, the promise – of a ground-up approach to social media, where communities decide for themselves what they will and will not put up with, without thin-skinned billionaires putting themselves in charge at a whim – is enough to keep users sticking around.”

We deliver all the digital marketing services you need, without outsourcing. For over a decade we have been designing and developing original, award-winning websites and marketing campaigns for companies across Europe.

All images and content are copyright of Kuka Studios Ltd ©2022. All Rights Reserved.